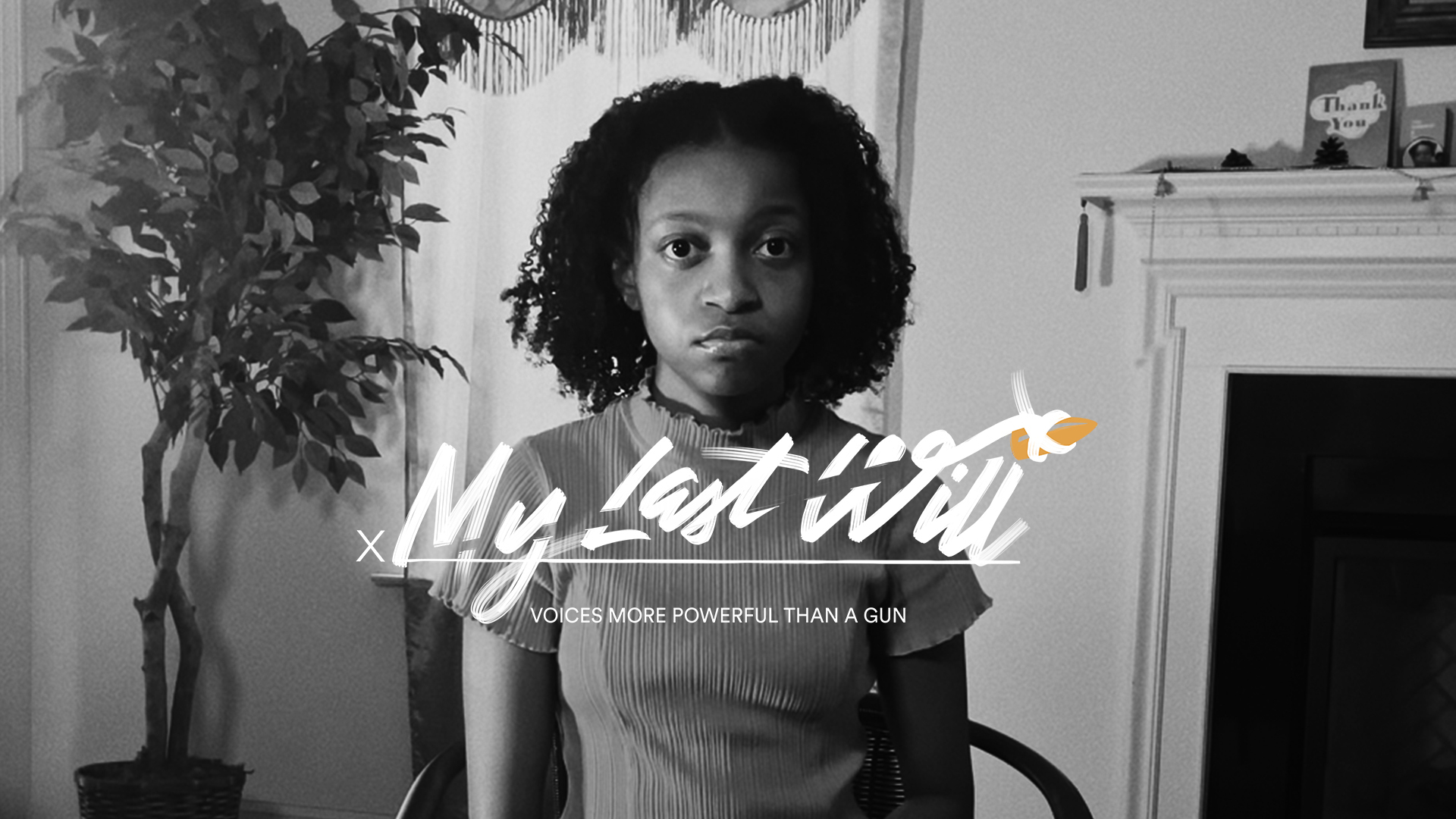 Change The Ref, Team ENOUGH, AREA 23 Announce "My Last Will"

Gun violence in the U.S. has continued to surge with this year on pace to be the most violent year for the U.S. in two decades. Today, in response to the continued and increasing gun violence nationwide, Change The Ref and Team ENOUGH have partnered with AREA 23, an IPG Health company, to find creative ways to address this urgent national epidemic and have unveiled “My Last Will.” This national campaign features the testament of people who shouldn't have to write one yet — teens and youth who are demanding in their last will that the U.S. Senate act without delay to stop gun violence in America. The campaign underscores the threat of gun violence to all Americans and the need to take decisive action to stop this public health crisis that kills over 100 people every day and 115,551 people annually.

In the coming days and months, Change The Ref and Team ENOUGH will continue to solicit these youth testimonies, which will be shared publicly and transmitted to each individual’s appropriate member of Congress, urging them to take action.

"Since February 14th, 2018, I've been trying to expose the role of gun violence in our nation. I've traveled around the country trying to get people to understand that they don't need to suffer firsthand what my family has gone through after losing our beautiful son Joaquin. Today, I believe that our only hope is to make a final call based on the young people’s right to a safe future. Unfortunately, I’ve reached a point where my best option is to become more radical and graphic with our disruptive message. It's time for American parents to listen to their kids before their voices vanish.”

“Since I lost my dearest son Joaquin on February 14th, 2018 in Parkland, my purpose in life is to advocate for gun regulation. The emptiness and incapacity to feel Joaquin’s physical presence inspire me to fight against social issues in the United States due to gun violence. I wish to see that significant changes are made to make our nation one where no one has to live in fear, thinking that they can lose their loved ones through this epidemic.”

“I experienced a mass shooting before I was 18, but the Parkland shooting was not my family’s first experience with gun violence. My uncle Patrick was killed in Brooklyn when he was only 18. My cousin was shot just last week. Gun violence is a reality for all of us in America, and as a Black woman in this country, since birth I was more likely to experience gun violence. In America, Black people are nearly 10 times more likely to die from gun homicide than white people, while gun violence is the leading cause of death for Black youth. In total, 73 percent of gun homicide victims are Black or Hispanic. Gun violence is an epidemic. It is a racial justice issue. And, we need action to stop it now.”

“We’ve been working with Manuel and Patricia since May 2018, less than 3 months after they lost their son, Joaquin. Their commitment to change gun laws, and their energy to keep fighting for it day after day, have always been a source of great inspiration for me personally and for our entire team. We hope that My Last Will can amplify the voice of young people across the country, making it impossible for senators to ignore their testaments demanding stronger gun laws.”

To watch the videos and read the testimonies, please visit mylastwill.us. Join the movement to end gun violence and share your last will on social media using #mylastwill.

About Change The Ref

Change The Ref (CTR), was formed to empower our Future Leaders. CTR gives the kids of today the tools they need to be empowered to make changes to critical issues that affect our nation, through education, conversation, and activism. It uses urban art and nonviolent creative confrontation to expose the disastrous effects of the mass shooting pandemic. It also brings focus to the NRA’s corrupt maneuvers to buy lawmakers, while forcing solutions which are essential to healing mass shooting victims’ families’ lifelong grief. Change The Ref’s ultimate goal is to give the young generation of survivors and victims a disrupting voice to help lead the way to change – a more peaceful future. #NeverAgain.

Team ENOUGH is the youth-led program of Brady, one of the nation’s oldest and boldest organizations fighting to end America’s gun violence epidemic. We believe that only when everyone has a seat at the table can we build an effective movement to prevent all gun violence in all communities. We are led by our Executive Council, more than two-thirds of whom are people of color, LGBTQ, and from diverse faith backgrounds. Alongside Brady, we bridge the gap across generations, while providing students and youth with a national platform to advance bold ideas and solutions to prevent gun violence. We run the Team ENOUGH Lobbying Collective, the nation’s only youth-led lobbying program for gun reform, where we educate and mobilize youth to advocate within the halls of power at their state capitols and the U.S. Capitol. We will be the generation to end gun violence.

Home to FCB Health and McCann Health agencies, IPG Health Network is a global collective of the world’s most celebrated and awarded healthcare marketing agencies. We are 5,000+ people across six continents, all singularly focused on accelerating progress in health for good and for all. With science, creativity, technology and data at our core, IPG Health makes science approachable, understandable and actionable. With 45+ agencies, including 18+ specialized units, our integrated approach to a broad range of communications capabilities ensures we can help clients improve outcomes and quality of life for healthcare audiences around the world. IPG Health is part of the Interpublic Group of Companies (NYSE: IPG). Visit ipghealth.com to learn more.

Change The Ref, Team ENOUGH, AREA 23 Announce "My Last Will"